We acknowledge the Gunai-Kurnai, and surrounding language groups as Traditional Custodians of the lands and waters in our shared region and we pay our respects to Elders past and present.

The earliest marked graves date from 1860, however official records were not started until 1866, and are incomplete until 1874. Early burials included those of explorers, pioneers, landholders and businessmen, their children and families.

Rosedale Cemetery was the earliest cemetery in the Latrobe Valley area. This reflected the status of the township of Rosedale in the 1860s as an important town on the route into and out of Gippsland, and a major crossing point on the Latrobe (formerly Glengarry) River.

In June 1859 a request was made to the Board of Land and Works “from the inhabitants of Rosedale for land to be set apart for Presbyterian Church purposes [and] also for cemetery purposes”. The request was forwarded to Mr Dawson, district surveyor, to select a portion of ground to contain an area of eight acres as a site for a General Cemetery at Rosedale.

An eight acre site for the cemetery was reserved in December 1867. In July 1875 an area of four acres adjoining the original site was also reserved. In 1884. a further eight acres was reserved in addition to, and adjoining, the first two sites.

A public meeting was first held in 1867 for the appointment of trustees for the Rosedale Cemetery, and to take steps to fence in the land set apart for that purpose. However, it was not until 1869 that tenders were called by Mr W. E. King for fencing in the Rosedale cemetery with a three-rail fence.

The Rosedale Cemetery was officially established in 1872, with the appointment of (original?) Trustees John W. Beattie, William Essington King, George Rintoul and Charles Du Ve (the last two being interred in the Rosedale Cemetery).

The first interments were made in the south west corner of the present cemetery; referred to now as the old or original section of the cemetery. The land at that time had not been cleared and the burials took place amongst the scrub. Not all of the early graves were marked, but some were honoured with red-gum head-woods shaped in the conventional rounded-top fashion. A wooden fence may have been installed to mark the grave and prevent roaming cattle from disturbing the grave.

One of the earliest burials, on the 1st of June 1862, was that of mounted constable Patrick Conaty from Sale. The Gippsland Times reported that: On Sunday last the remains of Patrick Conaty, mounted constable, were interred in the Rosedale cemetery. He was followed to the grave by a considerable number of persons, who were anxious to afford this last tribute of respect to one in every way well worthy their esteem.

Many of Rosedale’s early characters were buried in the cemetery. Charles Ignatz Du Ve reminisced about some of those pioneers in Olden Rosedale, written about 1910: “In what is now the business locality of Prince Street, were the abodes of Sam the Snob, and Old Joe Treader. Sam was of a reticent nature and was looked upon as a bit of a mystery. Joe Treader and his wife were not unfamiliar with matrimonial strife, and Mrs. Joe’s yells were a source of nocturnal disquiet. The south-west corner of the cemetery is now the resting place of these olden day folk, who were usually buried in an unorthodox style, since parsons were scarce in those days, and the Rev. Willoughby Bean, who was the ghostly comforter and adviser of Central Gippsland, was hard to find at home. Four panels of post and rail fence around the grave finished off the burial ceremony, as the cemetery was open bush. Yet even then, there were persons like John Gilpin’s wife “of frugal mind”, for on the occasion of the burial of an old gentleman whose boast was that he had been the Governor’s coachman before he “lit” in Victoria, his two sons were discussing the spot of the grave, when Peter said, “We’ll put him along o’ Old Sam, then two ends and a side will fence him in”. Next to Old Sam, Dad lies to this day.”

1st of June, 1862, Mounted Constable Patrick Conaty, the result of accident when a tree limb fell on him and his horse at Moe Bridge, he was stationed in Gipps Land for over four years. 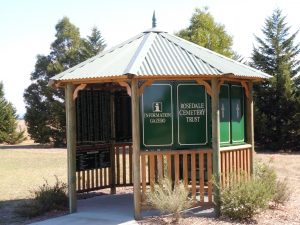 The Rosedale Cemetery is a place where visitors can remember, honour and commemorate loved ones and ancestors in a peaceful, rural location. It is located a short drive south of the Gippsland town of Rosedale in eastern Victoria. The earliest graves date from 1860, which reflects the status of the township of Rosedale at that time as an important place on the route into and out of Gippsland. Early burials included those of explorers, pioneers, landholders and businessmen, their children and families.